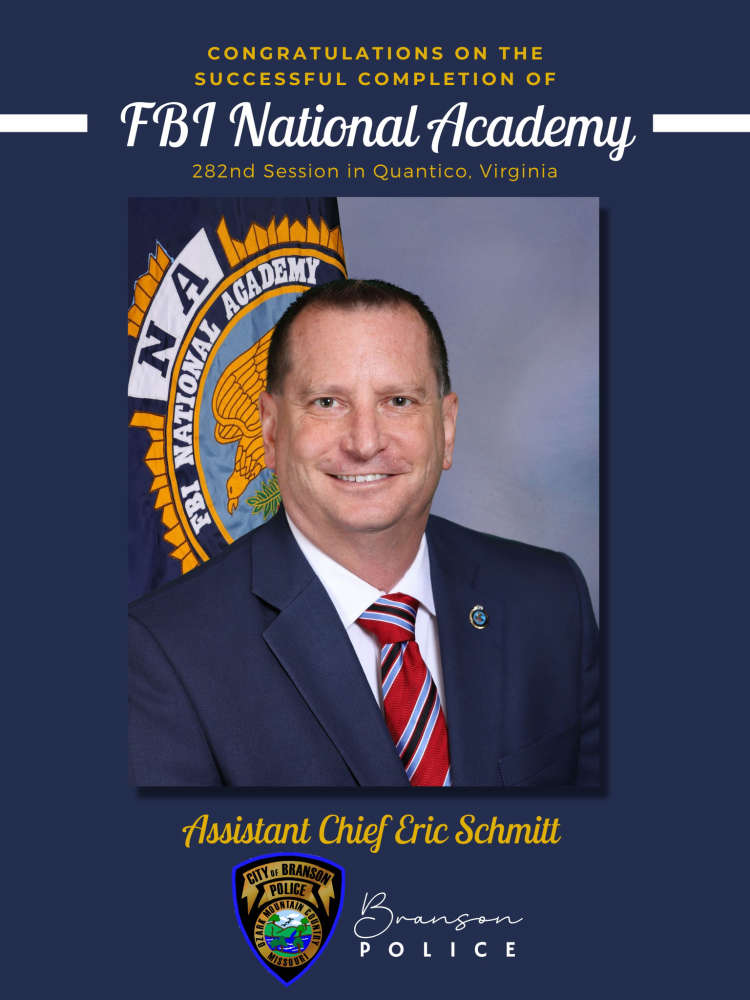 Branson Assistant Police Chief Eric Schmitt graduates from a special academy taught by agents of the Federal Bureau of Investigation.

According to a release from Branson Police, Schmitt was one of 254 law enforcement officers that graduated from the FBI National Academy which offers attendees 10 weeks of advanced communication, leadership, and fitness training.

The complete release can be read below:
On June 9, 2022, two hundred and fifty-four law enforcement officers graduated from the FBI National Academy in Quantico, Virginia. The 282nd session of the National Academy consisted of men and women from 47 states and the District of Columbia. The class included members of law enforcement agencies from 26 countries, four military organizations, and nine federal civilian organizations.
Internationally known for its academic excellence, the National Academy offers 10 weeks of advanced communication, leadership, and fitness training. Participants must have proven records as professionals within their agencies to attend. FBI Academy instructors, special agents, and other staff with advanced degrees provide the training; many instructors are recognized internationally in their fields.
We are extremely proud of Assistant Chief Eric Schmitt and his commitment to excellence.  Completing the FBI National Academy is a significant accomplishment and the department and City of Branson will benefit from his continued leadership.
A total of 53,435 graduates have completed the FBI National Academy since it began in 1935.  The National Academy is held at the FBI Training Academy in Quantico, the same facility where the FBI trains its new special agents and intelligence analysts.
Congratulations to Chief Schmitt, and we are excited to welcome you back to Branson!